Sensational singer, Teni has called out those who criticized her support for BBNaija season 5 winner, Laycon.

It would be recalled that earlier during the week, Teni was dragged online after she indirectly referred to disqualified BBNaija housemate, Erica as Omo Igbo while she campaigned for Laycon. Fans felt she was throwing shade at disqualified housemate, Erica, and also called her out being a tribalist.

However, after Laycon emerged the winner of the Big Brother reality show, Teni who had remained mute to the backlash, took to her Twitter page releasing a song celebrating Laycons fans, ICONS. Alongside the video, she wrote: Now I have your time, where are those fools that were saying rubbish!! This is how you WIN.

A Twitter user reacted by her calling her several derogatory names and also a disgrace to Nigeria. “I am here you fat fuck..Come and drag me, bastard..With your tribalistic self. You are a disgrace and a shame to Nigeria. You must repent from your ways by force.” Teni then responded a calm but savage manner.“You’re sound like you’re tweeting from the dark!! Wish you light and joy. Bitch”

See the picture below: 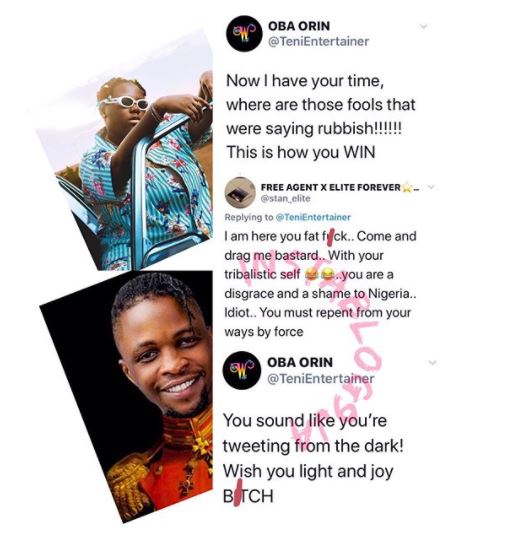 Bobrisky Brags As He Shows Off New Brabus Car Worth N140m He Just Bought For Himself (Photo) | AceRabbit.com.ng

Bobrisky Brags As He Shows Off New Brabus Car Worth N140m He Just Bought For Himself (Photo) | AceRabbit.com.ng