by admin
in News
0

It would be recalled that a few weeks ago, the singer was caught up in a cheating scandal earlier after a video of him fondling the breasts of a mystery woman who was later identified as Tiwa surfaced online.  9ice in the video revealed that the lady is his “wife” and warned guys to say away from her.

In another photo that went viral, the singer could be seen without clothes with his manhood on full display. 9ice then described his actions as shameful and terrible which has cost him his family. He apologized for his wrongdoings and pleaded with fans to help beg his wife because she is his backbone.

In a new photo shared by Sukanmi on IG, she posed up lovingly with the singer and their daughter with the caption:” Progress not perfection.” 9ice in the comment section wrote: “Human not God.” 9ice who has 5 children from 3 different women recently celebrated his 1st wedding anniversary with Olasunkanmi a few days ago. 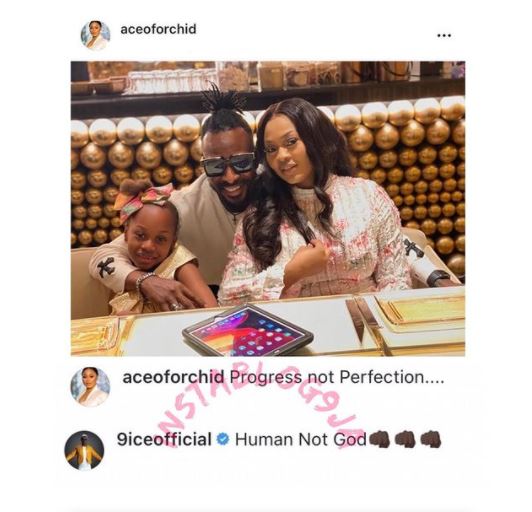 Kaisha receives a piece of land as surprise gift from her mother (Video) | AceRabbit.com.ng